0 History of Chaghi 11:47:00 PM
A+ A-
Print Email
Chaghi District (also Chagai) (Balochi: ضِلع چاغى), is the largest district of Pakistan and is located on the north west corner of Balochistan, Pakistan. It forms a triangular border with Afghanistan and Iran. Pakistan conducted a nuclear weapons test in 1998 at Ras Koh Hills Chagai District. 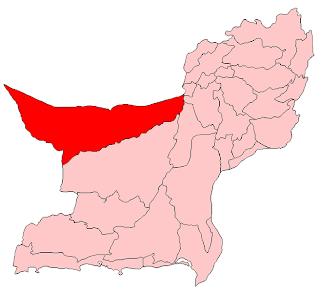 Chaghi/Chagai District was created in 1896. Nushki was the only sub division of the district with two tehsils, Nushki and Dalbandin. Naukundi sub tehsil was upgraded to tehsil in 1950. Chagai district was attached to Kalat District in 1957 but was detached after two years. The Police Department is still under the Superintendent of Police,Kalat. Dalbandin Tehsil was upgraded to Sub-Division on 1 February 1978. Taftan was created as sub tehsil in 1981. Chagai sub-tehsil was created with effect from 1 October 1985. The Assistant Political Agent Nushki remained sub-Divisional Magistrate of Nushki Sub Division till September 1989 when an independent post of Additional Political Agent was created for the district. Very little is known about the ancient history of Chagai.1998 Pakistan conducted their first ever nuclear weapons test, under Nawaz Sharif premiership, at Ras Koh Hills Chagai District.
The earliest monuments are the ruins of terraced embankments. These are found at the foot of the Ras Koh hills; they are ascribed to the fire-worshippers, who are said to have been the inhabitants of this area more than two thousand years ago. The next traces of ancient history are the square shaped tombs in the western areas of the district, which are attributed by the local traditions to the Kianian dynasty of Iran. The remains of the ruined forts and karezes found in different parts of the district are assigned to the Arabs. These are also sometimes attributed to the Mughalsand in any case indicate the presence of a richer civilisation than is now found among the Baloch and Brahui inhabitants of the district.
Share to: